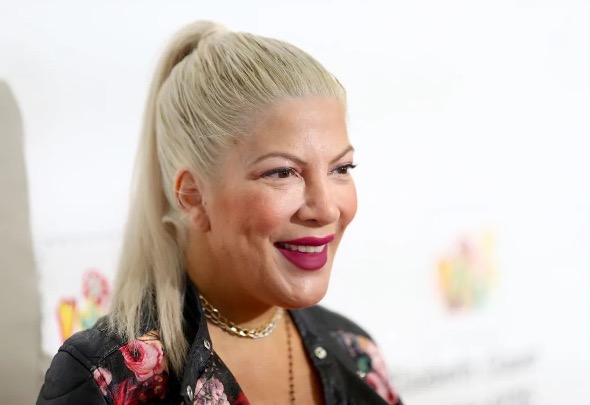 April 1st, also commonly referred to as April Fool’s Day, is a day known for pranks and jokes. While April Fool’s Day jokes are normally met with laughter and joy, it certainly didn’t pan out that way for the 47-year old American actress Tori Spelling.

On Thursday, April 1st, the mother-of-five created quite a stir on Instagram when she posted a photo of herself in which she was cradling her bare ‘baby’ belly with a photo caption saying ‘No.6.’ The photo looked like it was captured in a doctor’s office according to fans.

While many other celebrities rushed to congratulate Spelling on her good news and exclaimed their happiness in the comment section, most of her fans certainly weren’t happy and were left quite perplexed. Some thought it was nothing but an ill-timed pregnancy announcement, while others deemed it to be yet another tasteless April Fool’s Day prank and proceeded to slam the actress in the comment section of her post.

On any other day, a pregnancy announcement like such would have probably led the audience to happy tears, but definitely not on April 1st.

Many fans of the actress shamed her and accused her of being ‘tone-deaf and insensitive’ and reminded her that pregnancy is not a matter to joke about, especially considering how so many couples worldwide experience conceiving and fertility issues.

User @nani201981 commented, “If it’s an April fool’s joke, it is utterly distasteful for all those women who suffer miscarriages.” while @skylersw84 wrote, “If this is an April’s fool’s joke, it’s really tone-deaf and insensitive to the millions of women who struggle with infertility or who’ve had a miscarriage.”

On the other hand, though, there were happy and joyful comments on the actress’ pregnancy news as well, such as Actress Dawn McCoy, who commented, “Ohhhhhhh!!! This is the BEST news!!! I’m so happy for you!! A delicious little half dozen!!!” and Leslie Durso went on to say, “Woohoo! Congratulations Tori!! Such wonderful news!”

There was nothing from Spelling on the matter for the next few hours until she broke her silence the following day with yet another post on her Instagram where she said, “Every week, magazine and press outlets ask if I am pregnant. To set the record straight, I am not,” she wrote in a message on Instagram.

“The fact is, after my fifth baby, my body didn’t bounce back like it had before. That’s when the constant questions of ‘yet another’ pregnancy first began. Unless you’re in the public eye, it is hard to understand what it feels like to be body-shamed so publicly. I feel like I have to constantly defend my body when instead, I should be honoring it for the miracle of life it gave me five times.”

The actress went on to tell her fans about her miscarriage that she experienced once before and also explained how she would never hurt other people’s sentiments, especially those who have been unable to conceive.

She further added, “I know that pregnancy is an extreme blessing. And I would never intentionally poke fun at losing a child or not being able to carry one. I myself have miscarried,” she wrote in her statement. “My post was simply to turn the tables for once on the press. They constantly create wild and often hurtful stories about me, my body, and my family.”

“For those of you that are hurt, I hear you. I love you. I welcome your stories, and I will try my best to be there to support you. Please accept this as a virtual hug to my entire community,”

Tori’s apology was yet again met with mixed emotions, but a majority of her friends and fans rushed to her defense and sent lots of love and prayers her way.