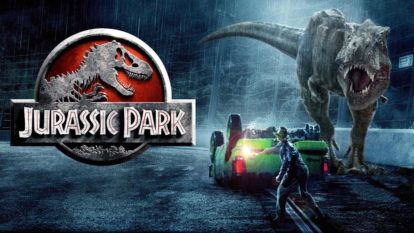 The 1990s was a decade that brought great indie-cinema breakouts and full-blown blockbusters to the world! Here are five 90s Hollywood movies to watch for the first time or re-watch them just for the nostalgia!

We don’t like throwing the word masterpiece around lightly, but calling Titanic, just that wouldn’t be untruthful.

Starring two greats in Leonardo DiCaprio and Kate Winslet as the leading roles and directed by James Cameron, the 1997 movie has stood the test of time. The story is beautifully told in two halves.  The first is a fun, playful, and mutual attraction of two lost souls. The second half, as you would already know even before watching, is a story of a great tragedy.

Another great thing about the movie is how historically accurate it is. Whenever you see a crew member of the Titanic in any scene, just know that survivor accounts have put them there.

Directed by Steven Spielberg, the first movie in the Jurassic Park, or later also known as Jurassic World trilogy, is a classic among kids and adults. The film stars Samuel L. Jackson, Jeff Goldblum, Sam Neil, and Laura Dern.

This 1993 movie, to this day, still holds up in its Academy award-winning effects and still looks better than a few cheesy CGI movies we see today.

This ‘ghost story’ stars Bruce Willis with an amazing performance from Haley Joel Osment as Young Cole Sear. Sear plays a child who is haunted by a dark secret as he can see ghosts. M. Night Shyamalan directed the 1999 movie.

The storytelling is great, and something absolutely phenomenal about the movie is that it intentionally keeps you bewildered through the complete lack of timeframe and constant scene transitions.

Pulp Fiction features Quentin Tarantino as director and stars three heavyweights in Samuel L. Jackson, John Travolta, and Uma Thurman. The movie intertwines four different stories of two hitmen, a gangster and his wife, and a nervous pair of robbers into one of the most deliciously violent crime-dramas ever made.

This 1994 movie has arguably some of the greatest dialogues in movie history. It boasts an incredible collection of performances in which three became Oscar nominees.

One of the reasons for its praise is it’s very impactful with an unglorified view into the lives of gangsters and the mobs. Most ‘mafia’ films usually glorify the mob lifestyle. However, Goodfellas does a marvelous job in making you feel the pressure and gritty filth of what that life would actually be like.