US House Speaker Nancy Pelosi, one of the main targets during the unexpected bloody Capital riots, finally expressed her thoughts about the incidents surrounding the horrifying events. She was shaken over the scenes that transpired in early January 2021.

To recall, tensions escalated among the pro-Trump supporters as the inauguration day for incoming president Joe Biden draws near.

While Trump finally conceded to Biden after several weeks of contesting the election results, his supporters continue to believe the election fraud charges.

On Wednesday, January 6, the brewing tensions finally snapped. It happened while the US Congress’s joint session congregated to officially count the Electoral College votes to certify Biden’s victory. The lawmakers had to stay inside the Capitol as the rioters reached the outside perimeters of the western part of the building.

Several hours later, the Capitol police ordered the occupants of the Cannon House Office Building and Library of Congress’ Madison Building to evacuate.

By 2 pm, the mob was able to break into the Capitol building’s first floor, then more chaos and discord took place as they break doors, windows and furniture. The rioters were shouting, “stop the steal!” while making their way into the building’s chambers.

The press managed to take photos of the looting. One of the items that they targeted was the lectern of the House Speaker. Some even broke into her office and gamely posed on her desk.

As the events unfold, Washington, DC’s Metropolitan Police Department chief Robert Congee III confirmed that there were fatalities during the riot. A woman was reportedly shot by a police officer, while three individuals died due to various medical emergencies.

Throughout the mayhem, the people repeatedly urged Trump to make a televised statement to stop his supporters from forcing their way to the chambers to avoid more bloodshed. But he chose to stay on Twitter to remind the rioters to “remain peaceful.”

After several hours, the outgoing president finally released a video to tell the mobsters to go home.

Over a week after the unimaginable violence took place, Pelosi finally broke her silence to talk about her thoughts regarding the horrifying incidents. She spoke with “60 Minutes” host Lesley Stahl to share her feelings.

The incumbent Speaker of the House became very emotional while talking about what transpired in the Capitol and how she almost get in the middle of the chaos. 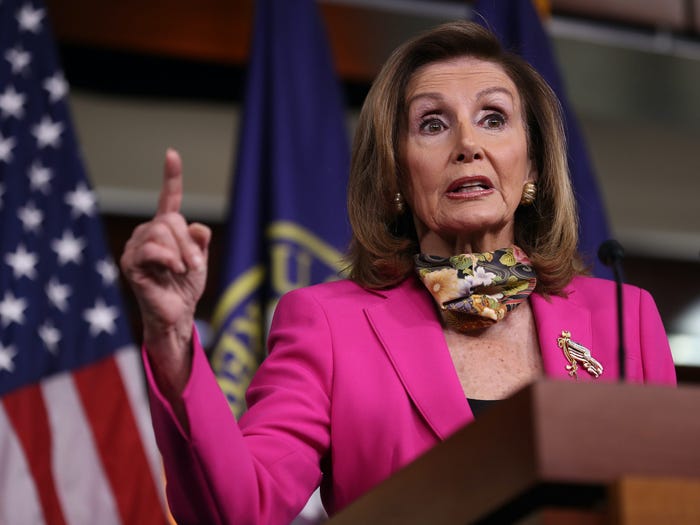 US House Speaker Nancy Pelosi spoke to call for the reversal of Trump’s travel ban on refugees (Lorie Shaull).

Pelosi recalled how she was asked to evacuate the building. She initially refused but was forced to do so for her safety.

She also showed the door that was broken down by the mobsters to access her office. Some of them rummaged through her private property and took her laptop. The rioters also gravely terrorized the staff members.

Pelosi claimed that someone organized the riot because it clearly showed a synchronized direction. They know who to target and where they were supposed to go.

She also noted that while Trump asked the mob to go home, he already caused damages because they believed his lies.