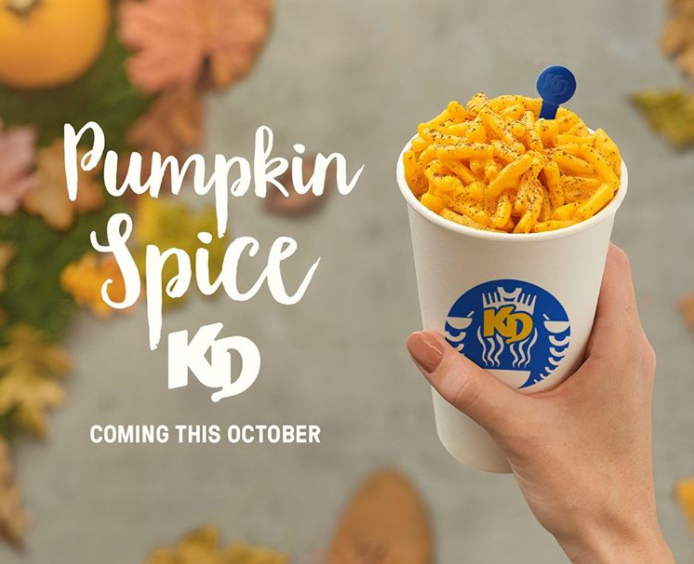 As a child, you likely enjoyed having mac and cheese as one of your favorite comfort foods, perfect to have for any occasion. Over the years, food brands and manufacturers have sought ways to make variations, such as boxed packages for on-the-go people, as well as fancy spin-offs that include ingredients like truffle oil or all sorts of cheese. Just when you thought you have seen all the possible twists in your favorite childhood meal, wait until you hear about what Kraft has to offer this season.

Now that the autumn season is well underway, your kitchen pantry may likely be filled with all things pumpkin-related! Pumpkin spice lattes, pumpkin pies, and pumpkin pancakes all sound heavenly, but what about pumpkin spice mac and cheese?

Yes, you heard that right. Popular food manufacturing company Kraft has come up with a seasonal pumpkin spice mac and cheese to give you a taste of autumn in your favorite comfort food. Kraft is known for inventing the boxed Kraft Macaroni and Cheese that we see in nearly all supermarkets today, so the brand is surely well-known among those who love this quick and easy pasta dish.

By now, you may have heard tons of hype and buzz about the unusual product after Kraft released a giveaway for the seasonal mac and cheese on its Instagram. Set to be released in October, Kraft’s pumpkin spice mac and cheese is made with the company’s classic cheese powder and infused with autumn spices like nutmeg, cinnamon, allspice, and ginger.

That said, the pumpkin-flavored product will not be sold in supermarkets the same way that other Kraft mac and cheese products are. Compared to the usual boxed packaging that you may be familiar with, this innovative mac and cheese twist will come in cups that look like your typical coffee cup.

Anyone interested in giving it a try has to sign up to be added to the waiting list at PumpkinSpiceKD.com. If you are one of the first 1,000 people, you get to try it for free once it becomes available. Initially, the catch was that the product would only be available for people in Canada, and only those who are accepted to the waitlist could get it.

However, after overwhelming response and feedback from Americans, Kraft decided to extend its reach and make an American version of the giveaway. The same rules apply, where the first 1,000 people to get in the waiting list will receive a Kraft pumpkin spice mac and cheese bundle, which also comes with a fork and coffee cup.

Indeed, the stories about pumpkin spice mac and cheese are true, but if you are feeling skeptical about it, you are not alone. Responses have varied significantly, with some welcoming the idea with open arms and others being more doubtful about the idea. No matter where you stand, it cannot be denied that infusing the autumn flavors into the nation’s favorite childhood food is definitely a bold move.

In this article:kraft, pumpkin spice mac and cheese