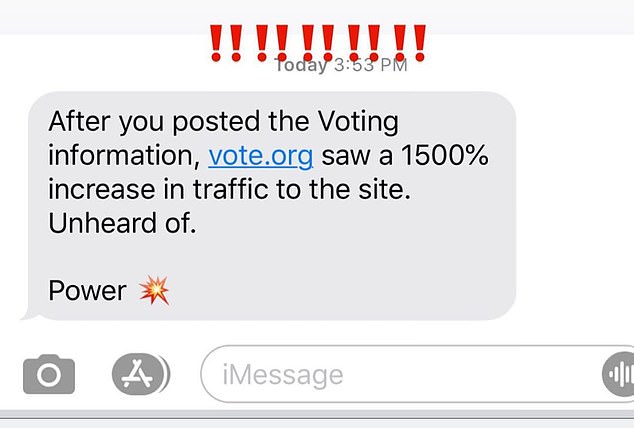 Members of the Kardashian-Jenner clan are very influential people. They are also vocal about registering to vote, and one of them, Kylie Jenner, actually helped boost voter registration traffic recently.

Jenner took to Instagram so she could post a photo of herself wearing a bikini. Part of the caption read, “but are you registered to vote?” In the same post, she asked her followers to click the link in her bio, and called them into action: “let’s make a plan to vote together.” After the post was up on her social media account, the voter registration’s website traffic for the United States’ upcoming elections reportedly increased by 1,500 percent.

In her bio, a link directs her followers to the Vote.org website. Hence, they tracked that the sudden spike in voter registration traffic was due to Jenner’s Instagram post. Aside from increasing the traffic to the voter registration website, they also recorded an 80 percent increase in the actual number of registrations compared to the day before Jenner urged her Instagram followers. Reports claim that around 48,000 people visit Vote.org daily since her Instagram post.

Jenner later took to her Instagram stories to post a message presumably from Vote.org. The message reads that after she posted the voting information, the traffic to the site was unheard of since such traffic is a first in the many years Vote.org has been in operation.

Aside from the bikini photo, Jenner also posted on her stories another call to action post. The story encourages people to vote because people must “make our voices heard this November.” Jenner continued to say that people need to see changes “now, more than ever” and that voters hold the power to make a difference. The mom-of-one also said that voting would take only a few minutes out of everyone’s lives including registering, filling in the ballot, and dropping it in a mailbox. She ended her story with the word “VOTE.”

Via Vote.org, people can check what is their status as a voter in the United States. People will see if they are registered or not. If they are not yet registered, Vote.org also offers easy registration for its visitors.

Reports also say that in the 2016 elections, only 138 million Americans voted. That was a very small number compared to the expected 328 million voters. This year also saw the highest rate of early voting in the whole of United States history because as of this month, already 1 million Americans have cast their ballots.

Aside from Kylie Jenner, her sister Kendall uses her social media influence to urge people to vote. In her first-ever Instagram Live, Kendall invited a political commentator named Jon Favreau. The two discussed voter suppression and voter turnout and how high the stakes are for this year’s United States election slated to conclude this November 3. Favreau believes this year’s election is the last chance for Americans to change what is happening in their country now. “Voting won’t elect a savior, it won’t solve all our problems,” he shared, and added that voting will give them “a chance to do something about climate change, systematic racism, healthcare, and education.”