Everyone knows that the US’s presidential elections have turned into a major popularity contest during the past couple of years.

While they are not joining politics per se, many celebrities and popular public personalities began to share their thoughts on the messy situation.

These days, the popularity of having celebrity “endorsers” of political parties to boost the number of votes received by the candidates is slowly on the rise.

And for this particular election, more celebrities made their opinions about who should lead the country known.

President-elect Joe Biden got plenty of celebrity endorsements before the election.

Lady Gaga released a pro-voting public service announcement where she wore some of her most iconic costumes and told the viewers that they could guess who she voted for. She also joined the campaign trail for the Democratic Party bet. Her actions prompted Trump to call her an “anti-fracking activist.”

Dwayne Johnson, the former WWE star who previously called himself a “political independent” and a “centrist” citizen, said that he is endorsing Biden and his running mate Kamala Harris. It was the first political endorsement that he did as a voter.

Tom Hanks and his wife Rita Wilson, is one of the couples who raised funds for the Democratic candidate before the election day. Wilson even offered to give financial aid to then California Senator Harris’s presidential campaign back in 2019.

Billie Eilish, the singer who may not be old enough to vote, caused quite a stir during the Biden-Harris campaign when she released a video where she accused Trump of “destroying” the country and urged voters to go out and cast their votes.

Madonna turned to Instagram to express her support and show her strong dislike for the sitting president. She said that she prefers seeing “Sleepy” Biden in the Oval Office compared to Trump.

Leonardo DiCaprio, the actor and environmentalist, was seen at a campaign fundraiser for the Democrats in Los Angeles, together with his mom, Irmelin Indenbirken.

Cards B., the controversial female rapper who was very vocal about her support from the Democratic bets. She even had a Zoom meeting with Biden arranged by Elle to give him a rundown of issues that she hopes to address when he sits in office.

John Legend and Chrissy Teigen is another celebrity couple who always expressed how “proud” they were for voting for Biden. The supermodel said that she and her singer husband believe that Biden can help bring the divided nation together. 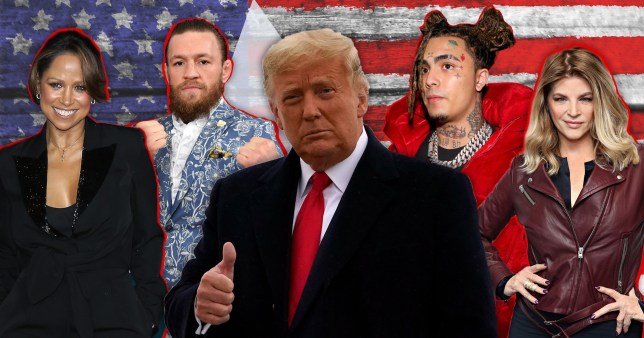 Trump also had a fair share of celebrity endorsers during his campaign.

The list includes Dennis Quaid, who said that the current president is doing a great job holding the country’s economy.

Jon Voight is another celebrity Trump supporter. The actor released a controversial video via Twitter where he labeled the Democrats as “evil” and claimed that Trump is the “savior” of the nation.

Rapper-rocker Kid Rock also supported Trump, even when the president was going through an impeachment process.

Despite being Irish, former UFC champ Conor McGregor also showed his support to Trump. He even described the president as “phenomenal” and possibly the “greatest of all time.”

This list proved that celebrities are not afraid to express their opinions and encourage the American public to vote for their next leader.

But one of the most famous personalities in Hollywood seems to dislike the idea of celebrity political endorsements.

Russell, who rose to fame in blockbuster movies like “Silkwood” and “Bone Tomahawk,” said in a recent interview to promote his upcoming Netflix film “Christmas Chronicles 2” that he believes his fellow celebrities must avoid publicizing their political opinions.

He told the New York Times that he thinks that actors must step back from saying anything so the public can still see them in any role they will play on screen.

His daughter, Kate Hudson, was one of the celebrities who showed their joy after Biden won. She even posted a photo of the president-elect and his wife Jill Biden on Instagram.

Russell’s long-time partner and mother of his kids, Goldie Hawn, also had her political thoughts publicized. While she did not announce who she voted for, she expressed her mourning after the death of US Supreme Court Justice Ruth Bader Ginsburg back in September.

However, the public must not expect to learn Russell’s vote anytime soon.

In this article:Kurt Russell, Politics