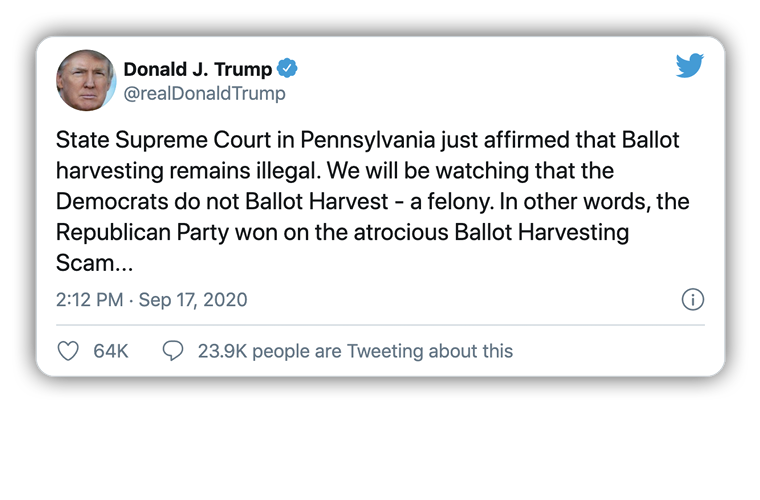 In what seems like a preview of what Americans must expect in the coming days, President Donald Trump tested the boundaries of Twitter’s election-specific policies on Monday night, before the day when the country votes for its next leader.

In his tweet, the Republican reelectionist complained against the Supreme Court’s decision to let Pennsylvania officials count the ballots transmitted by Election Day. His party spent their time pursuing an unabashed legal battle against voting rights all over the key states during the recent weeks leading to the election. This move is considered a questionable effort implemented to increase the sitting president’s chances for reelection.

However, Twitter chose to relegate the president’s fraudulent claim regarding the mail-in ballots from Pennsylvania. The social media platform hid his message beneath a misinformation warning, saying that the post was “disputed.” Twitter also turned off its non-quote retweet features, as well as liking and replying for the hidden tweet. As of the moment, the tweet remains viewable but still restricted.

According to the controversial tweet, Trump believed that the Supreme Court’s decision on the Pennsylvania voting could be highly dangerous. He also mentioned that this move would lead to rampant and unverified cheating and sabotage its overall systems of laws. The current president also shared that this decision will induce violent events in the streets, so he urges his followers to do something as soon as possible.

Trump also posted the same message on Facebook, but the social networking site chose not to remove the message. Instead, the social media giant added a label that talked about the country’s voting systems’ reliability. Three hours after posting on Facebook, the statement generated 63,000 likes and 13,000 comments.

Aside from ranting against the Supreme Court ruling regarding the Pennsylvania votes, Trump also went after the celebrities who campaigned for his rival during his final campaign push.

Speaking in front of his supporters in his presidential campaign’s last leg, the president claimed that he knows plenty of stories about singer-actress Lady Gaga. Based on his statements, he implied that all those stories might put the Grammy winner in a bad light.

James, fresh from his recent championship victory with the Los Angeles Lakers, officially endorsed Biden and his running mate Kamala Harris in his Instagram post on Monday night. Though James implied about his political choice in the past months, he never exactly campaigned for the Democrat candidates until after Trump’s unwarranted attack against him in one of his last campaign speeches.

The US presidential election is happening on Tuesday, November 3. Based on the polls, Biden is winning in the polls in most states. But the battleground states where Trump won against Mike Pence in the 2016 elections may still change the course of the upcoming results.